The National i-THRIVE Programme spoke with Frederick Peel, Project Manager at The Tavistock and Portman NHS Foundation Trust, about how he embedded the use of the THRIVE Framework needs based groupings into care plans for children and young people in their CAMHS services.

What was the aim?

In the summer of 2016, The Tavistock and Portman NHS Foundation Trust set their CAMHS teams a target to ensure care plans were in place for 80% of their children and young people by April 1st 2017. For the first time, these care plans included a space to enter which of the THRIVE Framework’s needs based groupings best described the person’s needs; Getting Advice and Signposting, Getting Help, Getting More Help or Getting Risk Support (Wolpert et al., 2019). The National i-THRIVE Programme spoke to Freddie, the Project Manager, about the steps he took to successfully reach this target.

How did you do it?

1.  We set a clear and specific target

The target was to have 80% of care plans completed by April 1st 2017. The percentage applied to all children and young people (CYP) under the age of 18 who had attended an assessment.

The decision about which THRIVE Framework’s needs based grouping a child or young person is in is made collaboratively between the young person and their clinician and discussed in the Multi-disciplinary Team. Training was required to ensure that clinicians had sufficient understanding of the needs-based groups. A quality improvement handbook about the THRIVE Framework was created for staff which included brief descriptions of the needs based groupings. Freddie attended team meetings with two resident THRIVE Framework authors, Rachel James and Sally Hodges, to give clinicians the chance to ask questions and clarify any issues.

GETTING ADVICE AND SIGNPOSTING is for CYP and families adjusting to life circumstances who have mild or temporary difficulties, where the best approach is a brief intervention of 1-2 CAMHS appointments, with the possible addition of self-support via online or other resources.

GETTING HELP is selected for CYP and families who would benefit from focused evidence based treatment with clear goals and the review of progress towards goals. On average 10 appointments would be offered, but the range would be wide, e.g. 1 year of weekly psychotherapy.

GETTING MORE HELP is where the need is for intensive and potentially long term treatment, for example for young people with neurodevelopmental disorders, psychosis or emerging personality disorder.

It is recognised that a significant number of CYP and families receiving Getting More Help are not benefiting from treatment but are being held in the CAMHS service solely because of concerns about risk and safeguarding. Such cases should be considered for Risk Support.

GETTING RISK SUPPORT is where CYP and families are unable to benefit from treatment but they remain a significant concern and risk. Anticipated outcomes are realistically conservative, and there needs to be close interagency collaboration, which includes CAMHS as part of the network. The CAMHS role is usually one which supports the system. One is transparent with families that this is the approach that is being taken.

Conversations about the differences between the THRIVE Framework categories continued throughout the project.

Freddie explained that there was initial scepticism by clinicians, some of whom felt anxious about co-designing the care plan with a CYP and their families. This anxiety was eased by highlighting that to some extent clinicians always discuss the options with the CYP and by writing the care plan this makes the process more explicit and efficient.

Staff required technical training in how to record the THRIVE Framework’s needs based grouping using the electronic notes system, CareNotes. Clinicians were shown how to easily create CYP-friendly versions of the care plans to share with young people and their parents. Due to technical issues, the ‘THRIVE Framework’ category field was not made mandatory on the care plans although this would have been desirable.

Freddie created a monthly report on the percentage of care plans that had been completed so far, which was broken down by team. This was sent out to every CAMHS team at the Trust. Teams who had completed a high percentage of their care plans were congratulated. Freddie says that a sense of competition between teams helped to motivate them to complete more care plans. This feedback was provided on a weekly basis to staff towards the end of the project in order to keep up momentum. 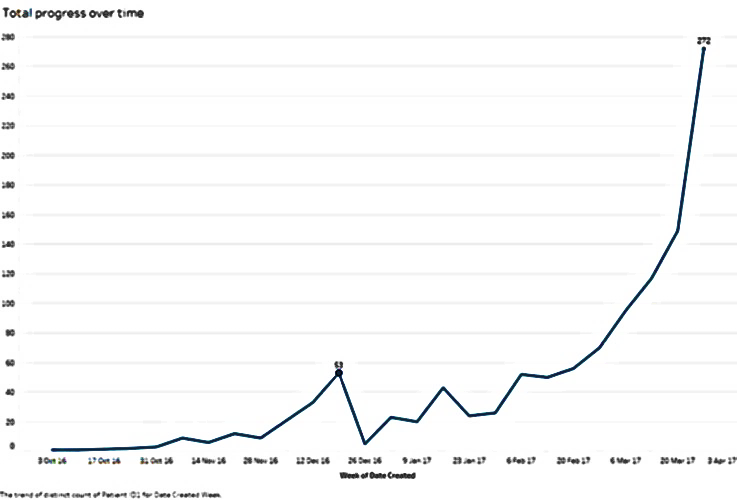 On April 1st 2017, Freddie took a snapshot of the care plan data which revealed that every team had successfully reached the target of having at least 80% of care plans completed. The average across teams was actually over 88%. Freddie was keen for the level of care plan completion to be maintained after the project ended and when he would no longer be dedicating time to it. Freddie identified four actions that made up Phase two of the project:

The 1000+ care plans which had been submitted with the THRIVE Framework’s needs based grouping information were reviewed to get a sense of the proportions of cases seen in each group. As you can see in the pie charts below, a larger proportion of cases than expected were categorised as ‘Getting More Help’ at review, as opposed to at initial assessment. It is unlikely that 55% of cases at review are ‘Getting More Help’ so this raised a Quality Improvement issue regarding the consistency of clinicians’ use of the THRIVE Framework needs based grouping categories and highlighted the need to raise staff awareness of the distinctions between categories. 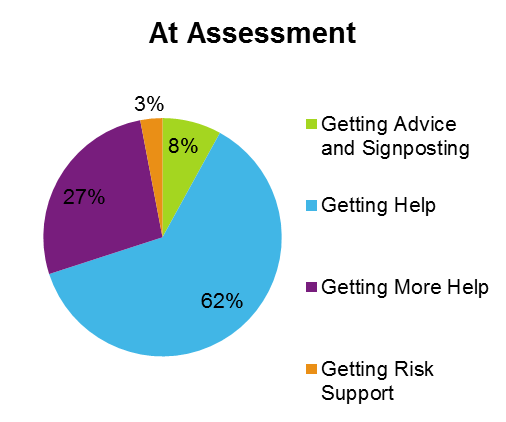 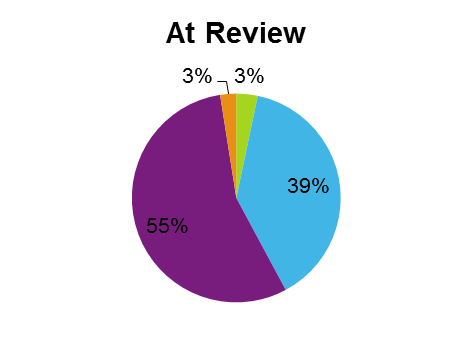 Freddie’s top tips for other sites

Queries about access to the i-THRIVE Grids and training to use the grids should be...

Getting Advice and Signposting